We are glad to present you the preliminary patchnotes for the upcoming 0.12.4 patch!

-Fixed a bug in which saving the weapons preset, all inventory, and trading operations could freeze
-Fixed part of inventory display bugs at 2k (or 1440p) screen resolution
-Fixed a bug where AI corpses could disappear during reconnect
-Displaying of notifications while receiving weapons from a SCAV box has been fixed
-Fixed a bug when the production timer might not be updated when the generator ran out of fuel
-Fixed a bug when it was impossible to enter the hideout after transferring graphics cards from the Bitcoin farm
-Fixed a bug when the context menu did not appear on items brought by SCAV
-Fixed a bug when the item could remain unexamined after production
-Fixed a bug when you, with a pistol or melee weapon, press the sprint button twice, the character runs in place
-Now you won’t be kicked to the main menu, after receiving a “the stash is full” error
-Fixed hideout bug which allowed to appear a window for transferring items from the first-person view
-Fixed pop-ups which can appear not in the center of the screen
-A bug while the pop-up with a list of missing items appears beyond the screen
-Fixed a bug which caused errors at the flea market while there are barter offers
-Another various bug fixes and corrections

-Stimulants parameters have been adjusted, debuffs became weaker
-The weight of various items has been adjusted
-The flea market is now available from the 15th PMC lvl (was lvl 5)
-Small reflex sights marks were downscaled (aimpoint, romeo, trijicon)
-Accuracy values in weapon characteristics are now displayed in Minutes Of Angle
-We added a weapon name to the standard weapon presets, which they relate to

We are making and made several changes already:

1. Ingame money disappearing bug must be fixed already (we are thinking about compensation for those who lost money).
2. Fleamarket gate is lowered to 10 LVL
3. Increased weights for overweight effects (now overweight starts from 40 kg and blends to 70 kg (was 30 and 60 kg) (yes, we can tweak it, yes we said that we will tweak it during tests and balancing), increased stamina capacities and so on.
4. We did something to lower headbobbing effect while being overweight (also this headbobbing will be linked to headbobbing slider in settings soon)
5. There is no 60kg tank battery. it was an old weight that was fixed shortly right after update

Some of the fixes we do live, some of them will be in the upcoming hotfixes

So, after the dust has settled, We decided to give you current status - what is going on and what's planned for the patch 12.5.

First of all, no matter what, thank you for your feedback related to new features - we did a lot of balancing changes to weight system, we fought headbobbing problem and currently working on hotfixes related to all the major problems you described recently.

So, the next 0.12.5 patch will be 95% fixes and optimizations. It will include a couple of features like quick after raid healing, post-effects filters, no additional content.

Thank you for support! The game will be more complex, we will introduce many features that will require testing and changes - don't forget this!

And the most importantly - stay safe and be careful in this difficult times! 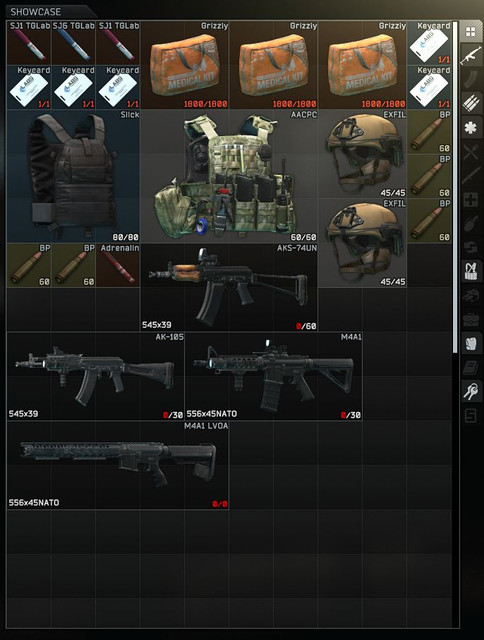 Changed:
- Lowered the weight needed for leveling strength skill
- Added heavy breathing when the character is out of stamina (sounds of heavy breathing and shaking hands)

A gdzie to ogłoszenie parafialne?

This will take from 3 to 5 hours, and the game will be stopped for this time.

There will be a global wipe of characters. The wipe will not affect the saved weapon presets and examined items in the handbook.

“Captcha” was added to the flea market.
If there are suspicious actions at the flea market and in the trade, a captcha may appear.
If you enter the captcha incorrectly three times, the account will be blocked from accessing the flea market for 5 minutes, after which you will need to enter the captcha again to buy the item.
Each subsequent three times incorrect entry will increase the time of the ban.
Access to trading will not be banned, but it will require entering a captcha.
All stashes, for all editions, increased by 2 rows (+20 cells)
Improved the display of objects via thermal imaging devices. Through thermal imagers, now, as in real life, it is impossible to spot through the glass.
Ability to lean while prone
Added the first iteration of Steam Audio, aimed at improving the positioning of sound in game, it can be turned on with the option “Steam Audio: Binaural audio” in the game settings. This option is disabled by default.
Now you can't sell items that were not found in raid on the flea market . This rule will not apply to weapons.
When combining stacks of items found in raid with items not found in raid, all items will receive not found in raid status.
Items that are placed in a secured container get the status " found in raid” only when you exfil the location with the status “Survived” (“Ran through” is not counted).
When you exit with the status "run through” or death, all items in your inventory that you brought out lose the "found in the raid” status
If you enter a raid with items that have the "found in raid” status, the items lose this status.
When buying an offer from the flea market, the item also loses the "found in raid” status
The quest reward obtained by completing a quest, crafted in the hideout, the Drops, and items obtained through the scav box will have “found in raid” status
All the Fence's goods will not have "found in raid” status
A large number of UI layout edits and UI bug fixes
The resource of items (fuel, medicine, etc.) is now displayed in the flea market interface
Now the currency icons at the flea market are colored differently
5 new parts for the AR-15/M4, not available from merchants (you will have to search for them on locations and in the inventory of bots)
New character tops and bottoms
BEAR - top " Tigr”
BEAR - pants from " Zaslon” equipment kit
USEC - Urban Responder
USEC - Deep Recon pants
Scavs - Motocross Jacket
New gear

A bug where the border of the interface elements were twitching
The mastering counter is now updated during the raid
One of the bugs where player did not hear the fall of the grenade
Ripples in the FLIR thermal imager
Bug that would cause inability to open the inspector of items on quest items
One of the bugs of incorrect calculation of the amount of money when purchasing an item
Bug when a grenade would not fly through the window if you throw it too close to the window
A bug where the character could pass through obstacles if player would switch to melee weapons while checking the weapon's fire mode
Bug when the image in the inactive optics was frozen if several sights were installed
Bug of inability to complete the quest if the player lost the connection to the server at the time of selecting the quest item
Bug when the sight image was frozen after reconnect
Visor audibility sounds, prone movement, third-person character shortness of breath
Fixed at the flea market:
Layering of the offer description in fleamarket UI
Bug of deducting twice the number of items from the merchant, when buying two items
Bug of overlapping the drop-down list of filters with elements of the offer list interface
Improved display of the purchase limit
Displaying the maximum number of items when purchasing a single offer with multiple items
Bug of inability to buy several items for barter
Fixed in presets
Bug for selecting blocked offers, if you put a checkbox when purchasing items for a preset “Select all”
Flea market interface block, when purchasing preset items, as a result of an error
Various other fixes
Bug when a character could move to a prone position while jumping
Blocking the examining of items if the player has started examining an item in the handbook
Movement bug, when a character could increase their speed as a result of running and jumping
A bug where the reconnect while indoors led to the fact that all sounds were not switched as indoor sounds
Bug when there was no animation for a melee attack while prone
Bug when a broken visor was visible against the background of the preset or modification screens in the Hideout
Spamming AI error on the server, related to searching the bot's path
Spamming error on the client “Graphics.CopyTexture called with null destination texture” when opening inventory
Lack of sound when switching magnification on some scopes
Error when the storage time of items in the email displayed a negative value when opening the window or receiving the mail
Bug that didn't display the list of friends for invite to the group dialog
Bug that caused deleted messages to appear in the dialog after sending new messages
Fixed incorrect position of the “Old school" bottom clothing icon
Various other bug fixes
A large number of fixes on locations (culling fixes, physical colliders, visual bugs, etc.)
Various localization edits
Various fixes in the animation system
Various network fixes
A large number of various technical fixes aimed at increasing the stability of the game

Removed the audio notification about the completion of crafting during the raid
Now you can't throw grenades while sprinting
Changed the conditions for the status “Survived”. Now you need to stay in the raid for at least 10 minutes or gain at least 600 XP before leaving the location.
Increased the amount of experience required for the first 20 character levels
Simplified Jaeger's quests
Changed various old quests, new rewards have been added
A large number of rarity edits and chances of items spawn
Increased the variety of items spawned in loot containers
Improved the quality of loot issued for a successful extraction with a friendly Scav
Various changes in the characteristics of items
Various changes in the equipment of bots and the player scavs
Various changes in loot spawn points locations