Preliminary 0.11.5 patch notes. Update is focused on fixes and optimizations. List is not final.

Fixed AI behavior on peeking via ALT+Q/E player
Improved AI interaction with doors
Balanced AI difficulty
Improved AI behavior when reloading a weapon
Fixed bug with AI choosing weapons
Modified AI spawn system in "Horde" mode
Fixed lack of AI reaction to getting shot
Added a new scav taunts
Modified raiders spawn on the Lab
Improved the AI “search for cover” system
Improved priority system for scav taunts
Improved AI behavior when taking damage
AI no longer see through elevators
AI no longer fall through the floor after death
Fixed a bug with damage to the bot, which is being treated
AI will no longer attack if you kill the player-scav who attacked you while playing a scav character

Fixed a bug where the player could drop an object through the floor
Fixed a bug with the de-synchronization of ammo type, which, in some cases could lead to 0 damage to the scav
Fixed a bug of treatment animation loop without effect
Fixed a bug in which the player who re-joined the raid could throw unlimited grenades
Fixed a bug where the same animations were played on all types of gestures
Fixed a bug where bots could run through doors
Fixed a bug where the Scav spawned with conflicting items
Fixed a bug where the helmet remained in perfect condition after killing the player in the head
Fixed glitch allowing to dupe melee weapons through insurance
Fixed bug when spawned scavs were invisible
Fixed a bug that caused tracer round pass through impenetrable obstacles
Fixed a bug with no contusion when the helmet got hit by another player
Fixed bug in ammo unloading from SKS mags
Fixed a visual distortion that caused the sight to shift when the visor was lowered
Fixed artifacts at the edges of the screen when the visor is lowered
Reduced the impact of post-processes on the glass visor, the view became clearer and better
Fixed bug with infinite looting sound when killing a looting player
Fixed weapon filter in merchants menu
Fixed the bug that didn't allow to reset the range of the prices search in the pop-up filter when you change the currency to any other in the Flea market
Fixed a bug where it was impossible to drag a weapon from a killed bot
Fixed a bug when the character was being pulled aside
Fixed a bug where you could sprint a little on broken, blacked legs and not take any damage
Fixed the Pilad P1X reticle zeroing
Fixed a bug that causes the inability to switch to voice 2 USEC
Fixed wrong exit timer value for certain extraction types
Fixed a bug when confirming the purchase of an offer without the necessary items for exchange
Fixed penetration of metal fence and glasses in different locations
Fixed an error when other players were interacting with doors
Fixed an error that occurs when opening boxes (loot containers)
Various fixes in the logic of the quests
Fixed overlapping of interfaces
Fixed categories display without offers in the wish-list
Fixed a bug that allowed to walk through the busts in the lab
Fixed bug with calculating the cost of the item after repair
Fixed display of quests text in Tasks while in the raid
Fixed time of active buffs when using stimulants
Fixed bug causing error 228 at the flea market, when studying the object placed in the container
Fixed "flicker" when scrolling offers at a flea market
Other fixes for client and server errors leading to de-syncs
Fixes of various errors and problems that lead to the game crash
Various localization bug fixes
Various fixes of the LOD (culling) at the locations
Fixed several problematic loot spawn locations
Various minor interface fixes

Added the ability to quickly cancel the offer after placing it
Shifted pop-up menu when opening the door in ADS mode
The rain sound is now quieter
Corrections in the head damage system when there is an equipped helmet with various components
Reduced the amount of health loss from exhaustion and dehydration
Antique axe added as a melee weapon
Completed alignment of mechanical sights
Gestures with equipped hand grenade now display correctly
Sprint with the ready-up grenade is now displayed correctly
Upgraded animations with RDG smoke grenade
Improved visibility of EOTech reticles
Improved vertical overlap and positioning of the sound (first iteration)
Fixed the container tag that could be shown behind the icon of the object
Added the ability to tag a pistol container
Added the ability to expand the item inspector window
Added loading of merchant's portraits indicator
Reduced accuracy of hipfire due to the weaker weapon grip
Fixed the display of interface elements in the trading menu in 4:3 image format
Now you can not require the same item as the offered one at the flea market (except for items with durability and HP)
The improvements of the in raid stamina system
The sound of a raid completion was moved from the music to the interface sounds
Increased LOD distance for armbands
Changes aimed at localization and reducing the problem with late spawns
Other minor changes

The Focus is on fixing longterm issues like freezes and stutters
No Wipe in 11.5
Recoil will be adjusted in this Patch - higher recoil
No ETA for 11.5.. Maybe in 2 Weeks or more.
preliminary patch notes

New Weapons
New Features
New fixes (of course)
After release of the 11.5.x patch it will take a few weeks to bring the 11.7.x patch online
Access to TerraGroup Labs will be restriced after release of 11.7.x
Access only possible with a KeyCard you can find on SCAVs / SCAV Bosses
Only 1 Key Card necessary for the whole group
After you accessed the Map, the KeyCard will be dissapear from your inventory
more....soon tm

Hideout will be implemented in12.x.
New location: Military Base
New SCAV Boss / SCAV Bosses
New Weapons
New Stuff at all
Character Customization
Weapon builds management
It will be possible to sell Weapon Builds to other PMC via special Trader

Details about the New Map: Military Base

This Map will have stationary Guns and Launchers
You will find a boss in the new location
New Features on this map
Mortarfire
SCAV Raider, who want to hunt you down
Dynamic Events
The Blueprint shows only a part of the map

General important points from the Stream

Frezzes and stutters have a high priority at BSGs
Kappa Quest will be available
Ideas for a "Prestige System". You might get special items (more cosmetic items)
BSG changed a lot from their old plans, thats the reason why the whole project needs more time
Report system to report suspicious Players
Idea for an "after raid" report that might include a video.
to see who killed you
how he killed you
you can use the videos for cinematic youtube stuff

customizable Rigs and Armor will come
VOIP will be directly connected to your character's position. So if you use VIOP other players will be able to locate you
New sound system is still in progress
Sound can be "ricochet" from objects
Multitool will be useable
You will be able to lock things with the Multitool
Offline PvE-Coop Mode will come
Unity 2018 Engine Upgrade will be tested first on PTS servers
PTS Servers will come
"There will not be a Battle Royal in EFT!"
Special AP 9x19 Ammo
Drum Mag for MPX will come
It will be possible to create your "own" Hideout
It will be possible to play music or watching videos in your Hideout

Invite friends to your Hideout is discussed
Map TerraGroup Labs will be located in Streets of Tarkov
The Lab will be a Raid in Raid
You can only access The Lab over Streets of Tarkov and you only can extract over Streets of Tarkov.
That means: If you done with looting in Labs, you must go back to Streets of Tarkov and extract
A complex System to help friends will be implemented
Help to extract loot
or something else
It will be able to extract your loot on special places without leaving the Raid
Special Items (like rare keys etc.) in Labs are no longer in one place.
this feature will be implemented on all maps
Cultists are only active at night
they have special meele weapons
they are sneeky
Radioactivity will come into the game
Radioactive items must be held in a special container
to pass these areas you will need special gear
Kiba Store will have an alarm system
if the alarm goes on, SCAV and SCAV Boss will run to this location
the alarm can trigger the SCAV Boss 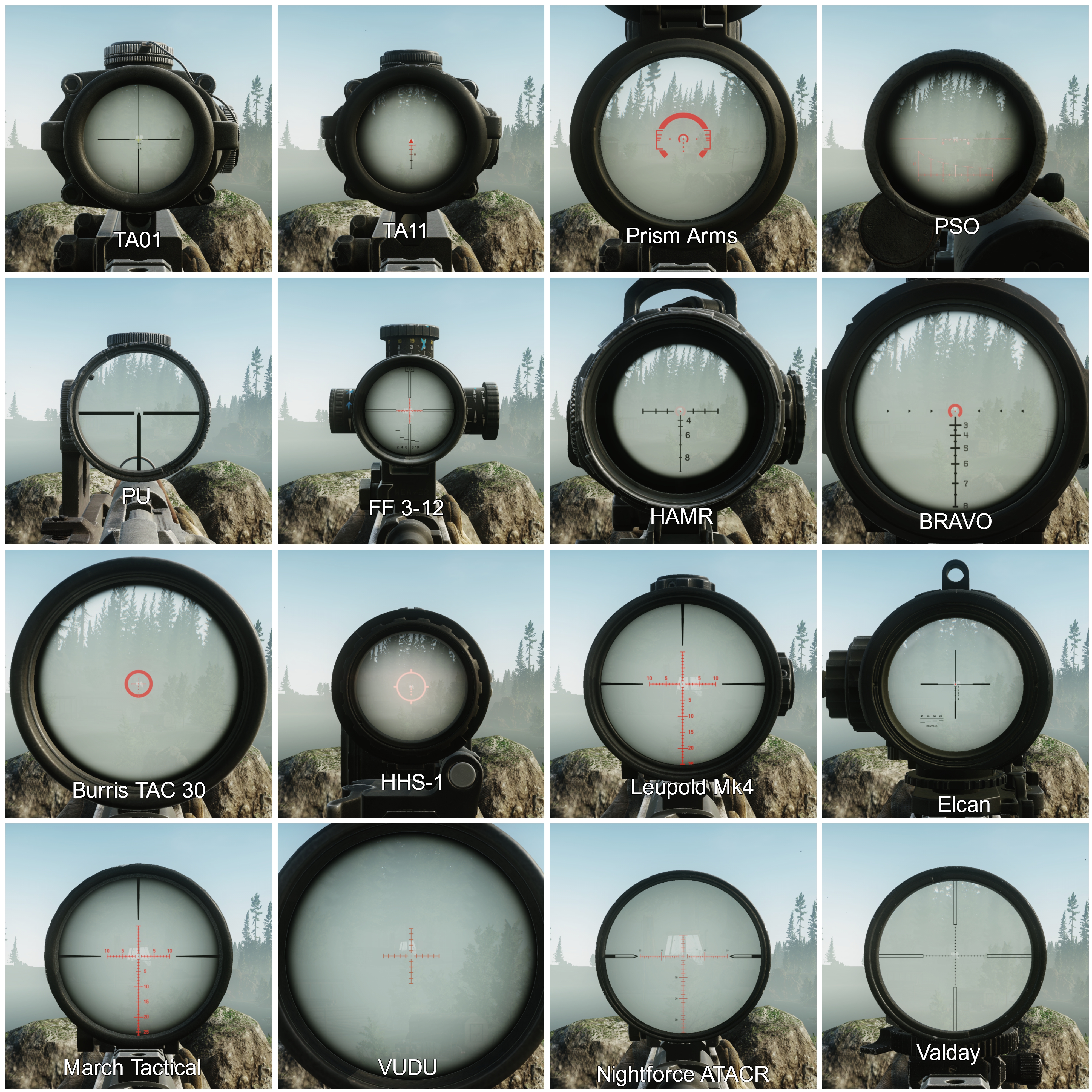 https://www.reddit.com/r/EscapefromTark ... _incoming/
Call me GypsyMalaga. Prepare your anus for boarding.

There will be different types of compass, BSG is playing with the idea that each player has a compass on his hand like a watch, but then there is a problem with having already modeled many beautiful watches to customize the character.

Maybe they'll eventually have a small compass on their hands

Large compass will be key-activated